Zinc Alloy and the Hidden Riders of Tomorrow

OK - so I have to start my musical odyssey with a Bolan post, don't I? After all, I AM the Bolanoid!!

So there I was, shopping out in the mall, when I was dragged by strange forces into a modern arts store, filled with swords and knives and film memorabilia. And there, under glass, I saw an artefact that stirred memories and made linkages I would not have thought possible.
The piece of jewellery in question was a Zinc Alloy Dragon - which immediately connected in my mind to one of the most underated Bolan albums - Zinc Alloy and the Hidden Riders of Tomorrow.  At first I thought there was some strange resurgence - a new version of the album, or some other event, that I was unaware of, but it turns out that there was actually no connection between the two items - until now! :) 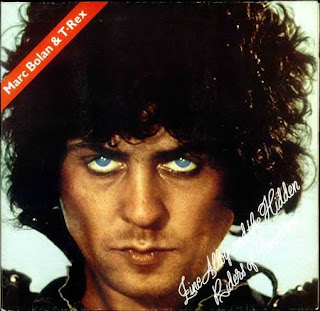 Zinc Alloy and the Hidden Riders of Tomorrow is, perhaps, my most played of all the T.Rex/Marc Bolan albums I have - and there is over 50 of those!  For most Bolan fans from the late 60's to the mid-70's, it may seem odd that I find this album so interesting, as the Electric Warrior and The Slider albums were much more commercially successful than Zinc Alloy was. But, for me, Zinc Alloy is perhaps the most complete album conceptually that Marc ever produced, and it's change in musical direction, for me, is the most redeeming factor of the album.  Sure - the majority of fans and critics didn't get the change - the move away from the commercially super-successful glam rock formula that Marc and Tony Visconti had developed between 1968 and 1973 - and the seemingly overblown dramatics of Whatever Happened to the Teenage Dream didn't gel with the sexy stuff from the Electric Warrior period, but what they all missed was the overall concept of the iconic leader Zinc Alloy leading his underground army through the trials of their pseudo-sci-fi reality, to achieve something greater.

To me, Zinc Alloy is an (almost) complete story - a rock opera waiting to be exposed in all its glory, telling the tale of a futuristic leader guiding his team of misunderstood minions through to a possibly bright future. It has its own resurrection myth built right into the storyline, and is populated with numerous characters and tales, typical of some of Marc's earlier albums from the Tyrannosaurus Rex period.  As always with Marc, there are songs of love in the track list, but, even more so, there are songs of transformation and philosophical reflection that help us follow the metamorphical tale.

For me, highlights are Galaxy, Changes, Nameless Wildness and Liquid Gang, although there are many solid tracks - examples of Bolan's new Interstellar funk-rock sound.  Much has been said of the different direction Marc had taken musically, even blaming Gloria Jones for being the influence behind the new sound.  But Marc had spent some time studying the different funk and soul styles that were prevalent in America at the time, and had tried to assimilate many of these into his new, expanded group format.  The result was a much grander, broader sound than previous T.Rex offerings, offset with deeper, darker visions and a more complete storyline, echoing the glories of what Marc's other grand rock musical, The Children of Rarn, could have been.

As with the majority of T.Rex albums, all of the songs were written by Bolan.

- Marc intended to ditch the T. Rex name, and wanted the group to be called Zinc Alloy and the Hidden Riders of Tomorrow, and the album to be called A Creamed Cage In August, but changed his mind when friends said the new name sounded too similar to David Bowie's Ziggy Stardust and the Spiders from Mars.
- The group eventually became Marc Bolan and T.Rex because Marc wasn't sure how the current fluctuations in the then T.Rex line-up would impact the players on the album.
Posted by Paul J. Todd at 10:34